The North American Review was founded in 1815. It is the oldest literary magazine in the US and it publishes out of my alma mater: University of Northern Iowa. In the early 2000’s I was a graduate student in the Masters of English Creative Writing program and one of my first memories of launching into graduate study was knocking on the door of the North American Review.

I was 22 years young, pregnant and living in the basement of a Mennonite church. I had no fears knocking on that NAR door because I was tired of being lonely and the thought of being able to read manuscripts and get paid to do it…well…was it all a dream?

Certainly not! I spent so much time in the basement of Baker Hall at the NAR office reading fiction stories, organizing submissions, and eventually selling advertising space that the office became like a second home for me. Not in the sense that I had changes of clothes stashed there or pictures of my family framed and around my desk. It was a second home for me because it housed some of the dearest people I ever met.

Grant Tracey and Vince Gotera were my professors and the editors of NAR. Vince could often be found playing his blue guitar at his desk while working in layout. Grant’s booming accent and quick laughter always welcomed stray students through the doors.

So when I was asked to join a panel of past graduate student NAR staff for the 200th anniversary of the magazine I jumped at the chance. Our panel session was aptly titled: The Kids Are All Grown Up: Former Editorial Assistants Pay Tribute to NAR

Mr. Luke Pingel moderated the panel and shared what, for him, were the powerful ways the North American Review shaped the way he approaches his work in academia now. He’s an Assistant Professor at St. Catherine’s University in St. Paul, MN. The poems he shared were striking and lyrical. His command of language was such a welcome rain on my ears. Plus Luke has this great voice with high volume and staccato diction. I missed sitting in class with Luke after hearing him read.

Mr. Marc Dickinson reminisced about the apparent chaos that was the office of the NAR. What was remarkable to him, and to everyone working at the NAR in various capacities, was the huge amount of access us underlings were afforded. We got to read every manuscript (if we wanted to) and were allowed to vote on whether we liked it or not…whether we thought it should get published in the magazine or not. While Grant and Vince committed to also reading all of the submissions (rare in the literary world, I might add) they allowed editorial assistants to go just as deep as they were willing to go.

We were included in the big Days of Defense where we gathered around a table to defend the pieces we felt strongly about publishing. What an honor. And when I fought for a piece with my well-planned case and it appeared in print the next issue…it was a certain triumph! I love to champion writers! When stories I desperately wanted to make it into an issue got shot down or passed on, I was so careful and loving in the rejection letter.

Marc reminded the audience that going through this process and sending out rejections transformed the way he understood his own rejections for years to come. And he was right. When I think that for 200 years people have been submitting writing to NAR and being rejected I think: WOW! I love those people.

Then Marc, who teaches creative writing at Des Moines Area Community College, read from one of his story cycles (wait…he gave it a different name) I was so engaged with the story I nearly forgot to prep my own self for my reading. No matter how his creative work is labeled it was quite subtle with a dark power underlaying it. I can’t wait to read more of his books.

Below is a picture of my favorite cover art of the NAR.

I’ve had this magazine on my shelf for years. I was one of the editorial assistants for this issue and I’ve carried it with me packing it in boxes and moving it from the church basement, to the basement of the Gotera’s house, to my first house, my second house and my third and current house. Why do I keep it? I thought I was a minimalist!? I guess it means more to me because it reminds me of what I’ve learned and where I was and what I’m doing now all in the name of creative writing. (Plus that’s Walt Whitman on the cover, I mean prose porn, right!?) 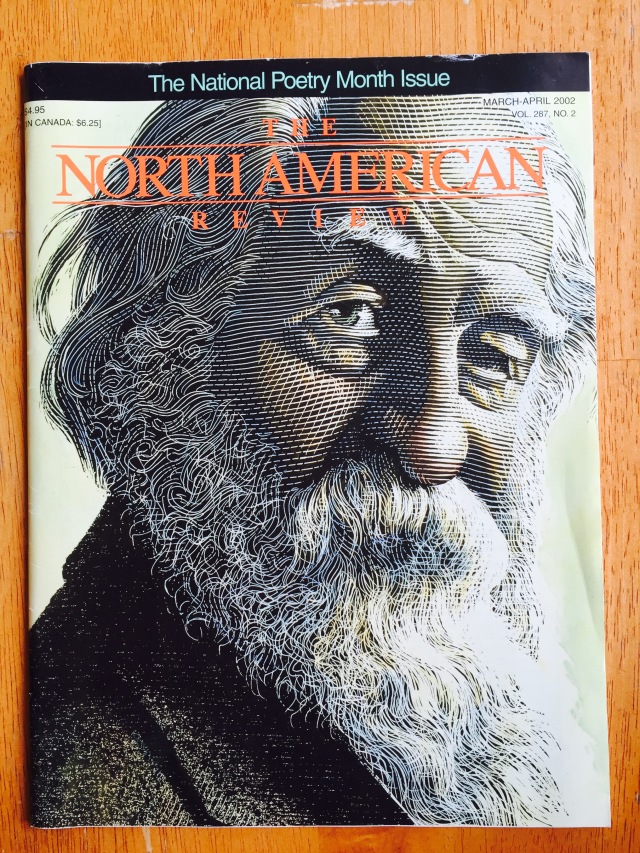 For my piece I reflected on how the NAR taught me about running a magazine and discerning good prose. But it also taught me life lessons:

Then I read some from my first novel.

Here is the crew after the panel:

To commemorate these 200 years, North American Review published a collection of works Walt Whitman had published in the magazine. How awesome is that!? It includes reprints of Walt Whitman’s pieces, the commentary and reviews of his pieces that were also printed in the magazine AND modern pieces published in NAR that were inspired by Whitman’s published pieces. I’m crazy in love with it. Plus, look at the cover, I mean geez, how cool is The Great Sympathetic: Walt Whitman and the North American Review. (Plus, look! My hair is almost as crazy as his! Oh Walt…)

SoooOOOooo, have you subscribed to the North American Review, yet!? Duh, do it right now. Join this LONG and AWESOME tradition of publishing powerful creative writing for 200 years.